Apple Watch Series 2 introduced in 2016 now considered as vintage product by Apple. That means that these devices will not receive proper authorized repairs and are considered no longer supported by Apple.

New Apple Watch Series 8 has addition of wrist temperature sensor which could monitor ovulation cycles. At the moment, this sensor does not provide absolute temperature readings and could not be used to measure exact body temperature.

Also, Apple Watch now has crash detection which will trigger call to emergency services when it detects a crash.

watchOS 9 will introduce Low Power mode which will provide more battery life by sacrificing some of the features.

AirPods Pro 2 will feature better noise cancellation, improved transparency mode (marketed as "Adaptive Transparency") which will silence some of the noises while keeping user within the environment.

iPhone 14 will come in two models – regular and Plus matching screen sizes of Pro models. iPhone 14 models will use A15 Bionic chip introduced with iPhone 13, screen will also be similar to last year's models.

iPhone 14 Pro models will have A16 Bionic chip and new pill shaped sensor area which will be used as Dynamic Island – this area will be used together with notifications and will be available for the third-party integrations.

Pro models will also feature significant upgrades to main camera – sensor is now 48MP. Typically camera will use 4 pixels together, however ProRAW format will allow to get full 48 megapixels for processing.

iPhone 14 US models will not have SIM tray and will rely on eSIM only.

Apple Fitness+ will no longer require purchase of Apple Watch. 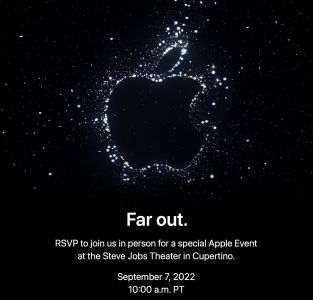 It was a long time since Apple hosted in-person special events for announcements. This time Apple will announce next generation iPhones, Apple Watches and probably other devices at Steve Jobs Theater in Cupertino.

New OS releases mean that some of older devices are left behind. This is true for iOS 16, watchOS 9, macOS 13 Ventura.

iOS 16 will not be available for iPhone 6s, iPhone 7 and original iPhone SE.

iPadOS 16 will be provided for:

watchOS 9 leaves Apple Watch Series 3 behind. Which is a bit strange since Series 3 are still sold by Apple as entry-level model.

Updated my watch last night to 8.3, set it on my 3rd party charger this morning, came back after an hour and it had gained maybe 2%?
Tried the same thing with my spouse’s watch and her 3rd party charger with the same result.
Put them on the official charger, zoom, done charging in no time. Argh!

Reports arise that Apple Watch Series 7 fails to render app icons for some apps. Issue might be related with icons being rendered in the wrong size. Also, some complications are rendered incorrectly.

Biggest problem here is that issue is NOT reproduced on Apple Watch Series 7 simulator.

Our results indicate that Apple Watch 6 is a reliable way to obtain heart rate and SpO2 in patients with lung diseases under controlled conditions. The advance of smartwatch technology continues to improve and studies to assess accuracy and reliability in various types of disease should be carried out.

"Conclusion" section of the study

Third edition of good reads is here. Here is what we've got for this weekend.

Have a nice weekend!